The seed for the establishment of the Scone RSL Pipes & Drums began around Anzac Day, 1995. The pipe band that had been playing for many years at the Scone and Gundy Anzac Day parades had pulled out at the last minute, leaving the Returned Services League in a great predicament. The pipe music for the parades in that year was supplied by loudspeakers in the back of a vehicle.

This was a most unsatisfactory situation and so the Returned Services League (in conjunction with the Scone RSL Club Ltd) approached a couple of pipers, Wayne Saunders and Mark Lawrence, who had on previously played with the Muswellbrook RSL Pipe band (ex-Upper Hunter Pipes & Drums) to come and form a band in Scone. The club, along with a local businessman, Eddie McPhee, were to provide the necessary funds to kick the band off. It was this connection that led to the selection of the Macfie tartan for the new band. 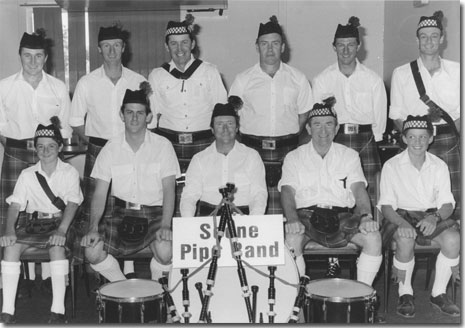 At the same time there was a fledgling band at the Scone Grammar School. This band had been practicing for some little time but had not really reached the stage of going out before the public due to lack of numbers and equipment. Those involved with this group then joined ex-Muswellbrook players to form the Scone RSL Pipes & Drums.

The founding members of the band were:

Present on that occasion were the following,

Since that initial parade in 1997 the band has played for Australia Day and Anzac Day Parades every year in Gundy and Scone. In 2006 the Aberdeen Anzac Day parade was also included.

Other regular functions that the band has attended include,

There have been other events attended but not on a regular basis and these have included,